Catholic Bishops call for relentless and honest fight against corruption 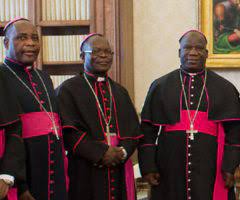 Catholic Bishops call for relentless and honest fight against corruption

The Episcopal conference of Malawi, a body of Catholic bishops, has called on all Malawians and in particular the leadership of the country to fight corruption in an honest and untiring way. Through a statement released on 19th January 2022, which all bishops in the country have signed, the bishops start by quoting pope Francis who bemoans that “corruption undermines the dignity of the person and shatters all good and beautiful ideals” (9th Dec 2019, International Day against corruption).

Filled with emotion, the statement states that the cancer of corruption is now embedded in Malawi and has contributed to keeping the country poor and underdeveloped. “Corruption is a very difficult vice to fight because it has taken deep roots everywhere in our country. And sadly, even many of those tasked to fight and eliminate corruption are too often sucked into it.” Reads part of the statement.

The bishops therefore appeal to the head of state Dr Chakwera, his vice Dr Chilima and all stake holders to help in the fight against corruption each taking their respective roles. “We appeal to the Head of State, Dr. Lazarus McCarthy Chakwera, the Vice President, Dr. Saulos Klaus Chilima and all relevant State institutions and their Heads to ensure the security of the ACB staff; especially the Director General. No one should be pressurized, intimidated or influenced by threats or any other means in the carrying out of their work for the good of the country.” Reads the statement.

The bishops did not shy from taking aim at their own Catholic Commission for Justice and Peace, and of course other Civil Society Organizations to help the public end the practice of corruption which they describe as a destructive cancer for the country.

The statement further calls on the donor community to ensure that the Anti-Corruption Bureau is sufficiently funded so as to enable it to continue with the fight against corruption. It also calls for security agencies to protect the ACB director Martha Chizuma as she continues her impressive fight against the vice.

The bishops implore the courts to make sure that cases to do with corruption are treated with urgency and that all are treated fairly and similarly before the law.

The call by the bishop has been made barely a day after the Public Affairs Committee (PAC) a grouping of religious leaders in the country took swipe that the country’s leadership for failing to combat corruption and treating it with kid gloves. PAC has condemned in strongest terms the selective justice that the Tonse Administration has portrayed in dealing with corruption suspects within its ranks. It has gone further to call for cabinet reshuffle, firing of the Secretary to the president and cabinet and the minister of foreign affairs among other demands.

Of late, there have been massive revelations of corruption in the country involving government officials and ministers all connected to famous business man Zenith Sattar. The ACB and the British government have been collaborating in investigation all the cases.